Jarrah is a stunning looking young specimen with super conformation. He has a really sweet head, a great neck set high on good shoulders. He is short through the back and has powerful hindquarters. When he is being ridden he is extremely soft through the poll and folds on to the bit with the lightest of contact. He has natural head and neck carriage, uses his back softly and is a pleasure to ride. Jarrah is a sensation!

Jarrah is by Jive Magic out of the Salute mare Samphire. Salute is of course the sire of Victory Salute who with Brett Parbery in the saddle has just come 9th in the world at the World Equestrian Games.
Jarrah had his first dressage outing on 13th February 2011 at Alexander Park Dressage Club and with Emma Bishop in the saddle scored 78.5%. This was his first dressage test ever, he won, and you would have to say that is a seriously spectacular start to what you would hope is a spectacular career.
Jarrah R early in 2019 won the World Cup Qualifier at Boneo and then later on in the year won the prestigous Sydney Grand Prix CDI.
Jarrah R and Rozzie are reuglars on the Grand Prix CDI circuit in Australia, often travelling interstate for competitions. Jarrah and Rozzie have had much success and almost always place. Jarrah is ecspecially strong in the piaffe and passage.
Jarrah is owned by Jonah and Edna Bevan. 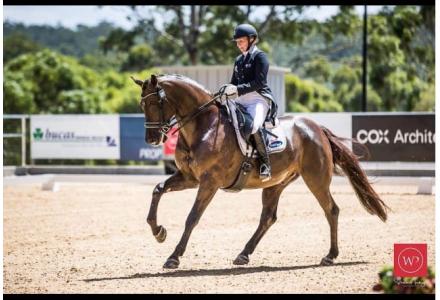