On September 23rd 2019 one of the corner stone stallions in the life and careers of Heath and Rozzie Ryan was put down.

Jive Magic was born on the 23rd May 1996 and that coincided with Rozzie training in Holland with Tineke Bartels in a small Dutch village called Hooge Mierde. Rozzie was riding her rising superstar Exellent. Rozzie called me up (Heath) and said that Tineke was riding the best young dressage horse that she had ever seen and his name was Jazz. He was at the time 4 years of age. I told Rozzie that if Jazz was that good she needed to find a colt foal out of a really good dressage mare that had bloodlines which would enhance piaffe and passage. Rozzie went searching. Rozzie was introduced to Nico Witte who owned Jazz and who was very enthusiastic about getting the Jazz blood into Australia. Rozzie found Jive Magic when he was just 6 weeks old and his dam line was Fruhling, Landadel and the Hungarian ridden stallion Aktion who I had watched at the Atlanta Olympics earlier that year. Aktion was the most amazing piaffe, passage machine. So after some traditional Dutch price negotiating Rozzie bought the baby Jazz colt Jive Magic.

Jive then travelled to England once he was weaned and met up with Regardez Moi who was almost exactly the same age and the two boys grew up cavorting around a beautiful hedged English field on Matt Ryans property. Matt of course was exclusively Eventing oriented and didn’t really know what to make of the two dressage babies.

Once Jive was three years of age he was broken in by Matt and was very gentile about the whole process. Gentile was not quite the case when Regardez Moi was being broken in!

The two boys Jive Magic and Regardez Moi still ran in a paddock together and were the best of mates. Years later they did become arch-rivals. As broken in three year olds they were loaded up on a plane and out to Australia they came.

Somehow Jive Magic became Rozzie’s and I took over the piloting of Regardez Moi’s career.

Jive Magic and Rozzie started their competition journey here in Australia in earnest in 2001.

Rozzie and Jive had their very first dressage competition at the Hunter Valley dressage day which was held at Rutherford which was and still is a polocrosse ground. The going was a bit on the dodgy side! Jive was very well behaved and was judged in the novice class by Nell Marshman who is today a FEI judge. Nell commented on Jive Magic’s power which was to become his trademark and said WOW! We can’t remember if he won or not but Rozzie can remember thinking that we needed to put shoes on him next time as he kept skidding around the whole arena.

Jive Magic became Rozzie’s special horse even as a youngster and Rozzie would take him to competitions on her own and he was always very well behaved. His special little habit was that he would stand quietly whilst being hosed down after a test but on the way back from the hose bay (hose attached to a tap beside a fence) he would always flop to the ground and have a jolly good roll. He was a very relaxed character. Rozzie always thought this was hugely funny. It drove me insane!

From go to whoa Jive Magic and Rozzie experienced outstanding success winning at Novice level in 2001, winning Elementary including the Nationals in 2002. Jive Magic and Rozzie certainly did get on a roll and also won at Medium level in 2002. By 2004 Rozzie and Jive were winning Prix St Georges and Inter I classes. Jive and Rozzie grew up in the era when Harry Boldt would come to the NSW Equestrian Centre on a regular basis. Rozzie had watched Harry training Nichole Uphoff on Rembrandt at the WEG in 1990 at Stockholm and had never imagined that she would have the honour of being trained by Harry herself. This cocktail of Jive and Rozzie and Harry Boldt was brilliant and laid the foundations for this wonderful partnership of Rozzie and Jive.

By 2009 Rozzie and Jive Magic moved up into the Grand Prix arena and took on the best in Australia. At the 2010 Sydney CDI Jive Magic reigned supreme and beat everyone.

At this stage of his career he was a very popular breeding stallion and up until this point in time most of the breeding in Australia was done by live cover which certainly put enormous pressure on the stallions where one moment they needed libido and the ability to cover mares and dodge the odd kick and the next minute they needed to be completely chilled and focused on moving from piaffe to passage without missing a beat and staying completely relaxed. Jive Magic struggled with this and would kick the walls of his stable when another stallion was led past or a mare was led past. This resulted in ringbone on his hind pasterns and a deteriorating soundness which accounted for his early retirement from competition in 2011.

For the next 8 years Jive produced lots of magnificent foals one of which is Jarrah R who Rozzie has had great success with at Grand Prix this year, 2019. Jive would spend his nights in the stable, and during the day in his stallion yard where he surveyed the world and watched every horse come in and out of the stables and he also had a clear view of all the horses working in the indoor school.

Jive never did get over his habit of kicking the stable wall when someone walked past him. The stable was custom designed with rubber belting hanging a couple of inches clear of the walls so as to cushion the impact. It was this habit that eventually culminated in an injury which ended his life.

At Ryans nearly all of our broodmares of which we have 30 carry the Jive Magic bloodlines and today bouncing around our paddocks right now are some of the most beautiful foals who without question are going to follow their grandad into the world of international competition.

For Rozzie of course Jive was a personality who has left a great hole in her life. Rozzie always called Jive ‘Buddy’. It was a privileged journey and Jive Magic will never be forgotten.

Jive Magic exploded across Australia in the Grand Prix dressage arena. At the 2010 CDI in Sydney, which is the biggest dressage show in Australia, Jive Magic danced his way through the Grand Prix test to convincingly defeat the best horses Australia has on offer. Jive is often referred to as the most powerful dressage horse in Australia. Jive Magic has absolutely explosive extensions coupled with a wonderful interpretation of piaffe and a smooth as silk transition into a passage which is full of bend and coiled power and harmony. All of Jive Magic's training and competing was done by Rozzie Ryan and the pair were completely focused up on the London 2012 Olympics.

Jive Magic is bred to be a Grand Prix dressage horse and unbelievably his younger brother, Chatham Park Jac under Rachael Sanna, has already represented Australia in the Dressage Team at the World Equestrian Games in Aachen 2006.

The fact that two brothers have not only reached Grand Prix dressage but have done it with distinction is a great illustration of how powerful genetics are and this is particularly significant for the mare owner wishing to breed a superstar.

Jive Magic is by Jazz who is recognised as one of the most significant dressage sires in the world today and is also the sire of Dutch dressage sensation Parzival ridden by Adelinde Cornelissen. On the dam's side, Jive Magic comes from Landadel who was the sire of both dressage horses and show-jumping horses at the 2000 Sydney Olympics. Right down on the bottom line is Aktion who represented Poland at the 1996 Atlanta Olympics and actually scored 10's for his piaffe and passage. Little wonder the first of Jive Magic's offspring are almost immediately making an impact on the competition arenas around the world.

Jive Magic has a destiny to contribute to the genetics of the Australian front line as we work towards Australia becoming a top of the range competitor internationally in the dressage discipline. 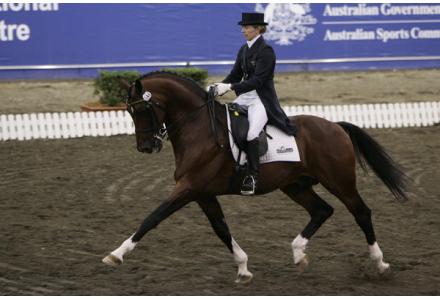