Rozzie found Salute in England in 1989 and he was imported in to Australia soon after. Salute was widely promoted and has had a number of competitive progeny. Salute has produced many highly successful dressage & jumping horses. Sire of Victory Salute (Australian Grand Prix Champion and 9th at WEG in USA);  Stirling Stilton (represented Australia at the WEG in Spain in 2002) DP Christopher (NSW Grand Prix Champion); Stirling Sprite (Advanced eventer and World Cup showjumper with Olympian Vicki Roycroft); Staccato (previously ranked number one eventing stallion in the world); Stirling Soux (4-star eventer); F1 Pharenelli (4-star eventer); Sydney Lights (3-star eventer); and Salute also sired the dam of Mystery Whisper (competed London Olympics 2012). Slinkys dam Lynx is a full sister to Londoner. Londoner was the Australian Prix St George and Intermediate 1 Champion when he was just 6 years of age many years ago (6yos are no longer allowed to compete at this level). He was sold to Mary Hana who took him on the Trans-Tasman tour of New Zealand and here he won Grand Prix against the Australian and New Zealand Team.

Salute's sire, Saluut, was a graded, 100 day performance tested Holstein stallion and an International Grand Prix jumper. It is widely acknowledged that Saluut would also have been equally successful as a dressage horse. Saluut is a proven sire of world class offspring in both showjumping and dressage. Worldwide he has produced over 300 successful showjumpers, 294 dressage horses, 353 graded mares and 16 graded stallions.

Saluut's sire Ronald has produced a large number of offspring successful in international dressage and jumping. Saluut's grandsire, Ramiro Z (himself a Grand Prix jumper ) is legendary, having been bestowed the title 'Horse of the Year' in 1992. Ramiro's dam, Valine, acquired international fame as a showjumper. She is the daughter of thoroughbred, Cottage Son, who became famous through his son Consul.

Consul is the sire of Granat, the most successful dressage horse of the early 1980's, and great grand sire of Corlandus, dressage Olympic Silver Medallist

An eventing son, Staccato competed at three star level with Craig Barrett, and at one stage rejoiced in the title of leading eventing stallion in the world on the WBFSH standings, and is now competing at FEI level dressage with Prue Barrett. 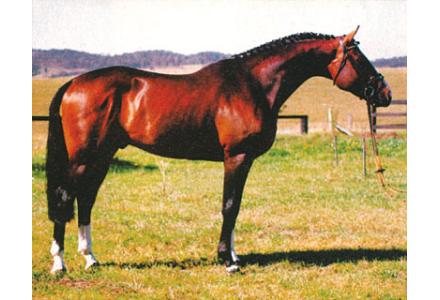