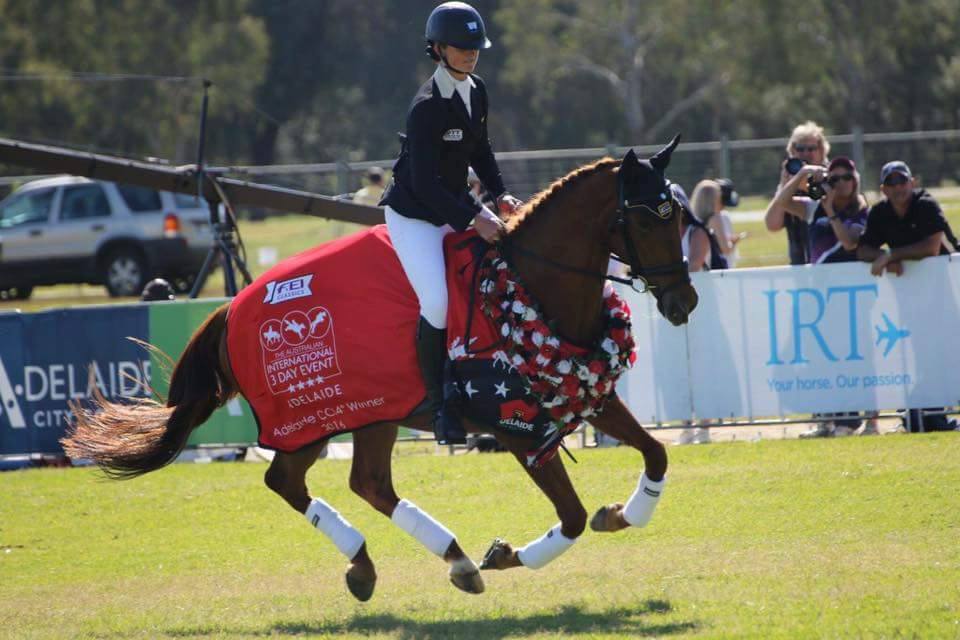 Hazel has just chalked up the biggest win of her life at Adelaide this weekend just gone, where she won the top class, being the 4**** class on Clifford who belongs to our next door neighbour Wendy Ward. Adelaide 4**** is the only event of this standard in the Southern Hemisphere so really the win was a performance of a life time! Hazel has been based here at Ryan’s with Heath and Rozzie for the past 6 years, starting at the end of 2009. She had just finished school and had always wanted to be a top rider in Australia since she was a really young girl. Initially she came for 4 weeks work experience and this was organised by her Aunty Lynn Kaelin who had in her youth also worked with horses. Hazel started on work experience in 2009 and never left. When she arrived she had never ridden in an ODE but had grown up on stories of eventing as both her mum and her aunt had grown up in England where eventing and hunting was what they talked about most.

Hazel teamed up with Clifford in 2011. Clifford belong to our next door neighbour Wendy Ward, he is a straight thoroughbred who was born very very slow. He was bred by Wendy’s sister, Sue Devereux in Tasmania, Sue initially broke him in and started training him to be a racehorse however Clifford didn’t even see a barrier trial because Sue felt he was so slow and so embarrassing.
From those rather inauspicious beginnings came Clifford and

Hazel to today where Clifford is currently ranked 5th on the FEI rankings in the whole world, that is before he receives his points from the win at Adelaide where he may end up being the number one horse in the world. This is a lovely story however it has taken a lot of hard work from both Hazel and Clifford and their certainly has been some very difficult moments where most people would not have been able to rally and keep going. Perhaps one of the biggest lows was at the end of 2014 when Clifford was just going 3*** level and they had a misunderstanding on cross country at a sunken road jump complex and Clifford fell landing on Hazel which resulted in Hazel sustaining 5 fractures in her pelvis.

Perhaps the outstanding characteristic of Clifford is that he does have a heart of gold and always tries his best and perhaps the most outstanding characteristic of Hazel is that she always works really hard and is always very methodical and conscientious. Neither Clifford nor Hazel are natural show offs but their results say it all. We are Ryans are very proud of both of them!