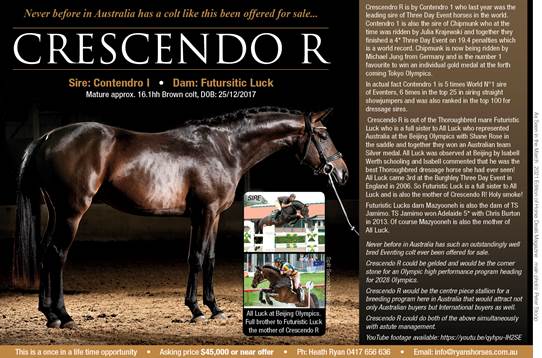 Never before in Australia has a colt like this been offered for sale...

Crescendo R is by Contendro 1 who last year was the leading sire of Three Day Event horses in the world. Contendro 1 is also the sire of Chipmunk who at the time was ridden by Julia Krajewski and together they finished a 4* Three Day Event on 19.4 penalties which is a world record. Chipmunk is now being ridden by Michael Jung from Germany and is the number 1 favourite to win an individual gold medal at the forth coming Tokyo Olympics.

In actual fact Contendro 1 is 5 times World N°1 sire of Eventers, 6 times in the top 25 in siring straight showjumpers and was also ranked in the top 100 for dressage sires.

Crescendo R is out of the Thoroughbred mare Futuristic Luck who is a full sister to All Luck who represented Australia at the Beijing Olympics with Shane Rose in the saddle and together they won an Australian team Silver medal. All Luck was observed at Beijing by Isabell Werth schooling and Isabell commented that he was the best Thoroughbred dressage horse she had ever seen! All Luck came 3rd at the Burghley Three Day Event in England in 2006. So Futuristic Luck is a full sister to All Luck and is also the mother of Crescendo R! Holy smoke!

Never before in Australia has such an outstandingly well bred Eventing colt ever been offered for sale.
Crescendo R could be gelded and would be the corner stone for an Olympic high performance program heading for 2028 Olympics.

Crescendo R would be the centre piece stallion for a breeding program here in Australia that would attract not only Australian buyers but International buyers as well.

Crescendo R could do both of the above simultaneously with astute management.

This is a once in a life time opportunity. Asking price $45,000 or near offer.