No longer standing to the public.

Questing R is a fascinating addition to the Ryans’ stallion band. He was bred by Michelle and Judith Buckely from Hunterview Stud, Scone and is by Quarterback, who carries the Quando Quando bloodline. Quando Quando represented Australia in 2006 at the WEG in Aachen, Germany, and at the 2008 Olympics in Beijing. Quando has the most amazing temperament and this has found its way all the way down to Questing R. Quarterback, the sire of Questing R, was the Bundeschampion 3 year old riding horse. He scored a 10 for his rideability. On Quarterback’s dam line is Poesie who is by Brentano II. Poesie is the mother of Poetin who won the Bundeschampion as a 3yo, 5yo and 6yo. Poetin sold for 2.5 million Euros. Just going back to Poesie, she is by Brentano II and so Questing R does carry a double cross of Brentano II.

Questing R’s dam is by Brentano II out of a Wenzel mare. Brentano II is famous for producing international Grand Prix dressage horses including Brentina, winner of the World Cup Final in 2003 at Goteborg, Sweden. You can look Brentina up on the web and the Americans are saying this is the best dressage horse ever in the USA. Right down the bottom of Questing R’s pedigree is Stirling Desire, with Donnerhall, Pik Bube and Salute bloodlines. Questing R has more scope in all his paces than previous stallions here at Ryan’s.

The most recent development on the Quarterback bloodline is Isabelle Werth is now campaigning DSP Quantaz who is also by Quarterback and who is scoring 10s for his piaffe and passage. With the retirement of Isabelle’s two Olympic Gold Medal winning mares, Bella Rose and Weihgold, DSP Quantaz is now Isabelle’s top Grand Prix horse. It is generally accepted that he is about to become the number one dressage horse in the world!! Patrick Kittel has just won the big Grand Prix competition in Doha riding Touchdown who is also by Quarterback and he scored 77.652%. So another international superstar about to burst upon the Olympic scene. Locally, here in Australia Jayden Brown is riding Willinga Park Quincy B who scored 76.177% in the Prix St George at the 2022 Sydney CDI. Quincy is by Quarterback and is Jayden’s big hope for the 2024 Paris Olympics. Quarterback bloodlines are about to go viral!

Questing R started his competition career spectacularly in 2016/2017 where he scored a massive 89% at Novice level and on 12 occasions exceeded 70%. He became the Australian Novice and Elementary Dressage Champion. Questing R had a setback with a shoeing issue but is now back in work and is entered for his first Prix St George test. Questing R is already piaffing and passaging and we are hoping he will repeat his Novice and Elementary performances at Grand Prix. Watch this space!

No longer standing to the public. 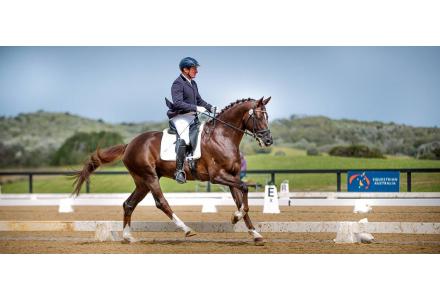