Don Ramiro has entered an elite band of Australian stallions by siring numerous FEI horses. His success is no fluke when you study the history involved in his breeding. His grand father, Donnerhall, is one of the most influential dressage stallions of all time, and when crossed with Pik Bube, produces sensational horses such as the sire of Don Ramiro, Don Primero.

Don Primero has been at the forefront of breeding even before his own competition success as an International Grand Prix horse for Karin Rehbein. He is the father of World Young Horse Champion DiMaggio along with many top auction and elite FEI horses world wide.

Don Ramiro is a reflection of this breeding. Being imported to Australia as a young horse, he was ahead of his time in relation to his type, movement, trainability – he was, and still is, a very modern example of the Warmblood horse. He was purchased by the Oatley family as Kristy's potential Grand Prix horse. He was campaigned and trained by Heath Ryan before Kristy exported him to Germany to train with some of the World's best. Unfortunately an injury put an end to his competition career and he was retired to stud. Don Ramiro stood at the NSW Equestrian center for several years. In 2003 Don Ramiro stood at public stud for the first time.

Don Ramiro is not only seeing progeny excel in the dressage arena. Event riders are choosing to use Don Ramiro to produce elite sport horses that can win the dressage phase and go on to jump clear and under time!

Don Ramiro is now sadly deceased but will continue to live on through his awesome progeny. 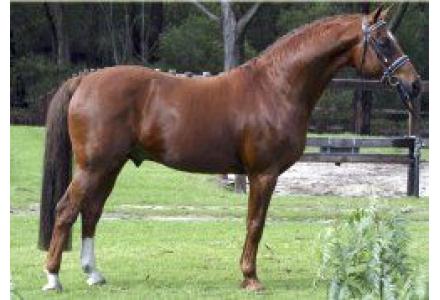