Tonto R is a stunning young colt who has exceptional bloodlines and incredible paces. He is probably our most outstanding foal for the 2021/2022 season. Tonto is by BML Totality who in turn is by the legendary Totilas. BML Totality himself we are very excited about for the future! He is very elegant, has great paces and is showing amazing abilities to collect. BML Totality has a natural softness with a beautiful back to sit on and a great attitude towards work and training. BML Totality has just started his competition career with just one outing where he had a win scoring 71%.

BML Totality’s sire, Totilas is still considered today as being one of the most amazing dressage horses ever seen. He broke all world records and we are unlikely to see another horse like him for another 100 years. However, Edward Gal (Totilas’s previous rider) has said that he believes the two Totilas sons he is currently campaigning at Grand Prix, Toto Jr and Total US are as good as Totilas himself and perhaps are going to be better in time! It would seem he was right. Total US competed at the Tokyo Olympic Games for the Netherlands and scored an impressive 84.15% in the Freestyle which placed him 6th in the individual competition. This is incredible considering the stallion is only aged 9 and has not been competing at Grand Prix for long at all! There was also 2 other Totilas offspring competing at the Tokyo Olympic Games including Go Legend ridden by Marlies Van Baalen and the other Te Quiero SFI ridden by Austrian Christian Schumach. So in total there where 3 Totilas offspring competing at the Tokyo Olympic games! Considering this must be Totilas’s early progeny I think there is much more to come from his bloodlines in the future. Totilas is currently placed 7th on the WBFSH Sire rankings.

BML Totality is out of the Regardez Moi mare, Resplendent R. Regardez Moi having three times been the Australian Grand Prix Champion and having represented Australia at the World Cup finals in Las Vegas. Resplendent R is out of Jumping Janie R who is by the Grand Prix winning dressage stallion Jive Magic. Jive and Rozzie won the Grand Prix at the Sydney CDI which is perhaps the biggest Grand Prix show in Australia in 2010. Jive Magic is by Jazz. Jazz also made himself felt at the recent Tokyo Olympics. The mare line on BML Totality brings in lots of great bloodlines in Donnerhall, Rubenstein, Jazz, Pik Bube, Angelo and Salute. 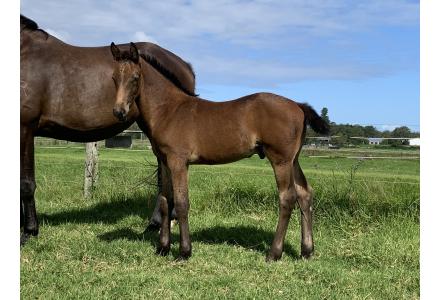