Acid Jazz is a beautifully put together smaller type of warmblood. He has quite a refined head, a beautifully set on neck and quite a compact body. His legs are finer and correctly structured. Acid Jazz is being produced for the dressage arena and will start his dressage career in the latter half of 2010. Acid Jazz has great paces, as you would expect from his pedigree. Jazz, the sire of Acid Jazz, is currently the number one dressage sire in the world today. Stirling Sorbet, the dam of Acid Jazz, is a full sister to Stirling Sprite who was an advanced eventer with the Turner family and then became a World Cup show-jumper with Olympian Vicki Roycroft. Stirling Sprite was a stallion and has left some top of the range Olympic discipline horses coming up through the grades. Stirling Sorbet in turn was by Salute who is perhaps one of the most influential Olympic discipline sires in Australia today. Salute is the sire of:

Right down on the bottom line is Double Cream who was the sire of Olympic eventers Trade Commissioner ridden for Australia by Scott Keach and Casson Road who competed for Korea at the Seoul Olympics. Double Cream actually sired lots of 3-star eventers including Benduka ridden by Simon Kale and Roma's Double ridden by Kim Piper.

Acid Jazz is unique in bringing together some of the top performance lines from the Northern Hemisphere and from the Southern Hemisphere. Currently Acid Jazz is training and campaigning with Heath Ryan and already the astute mare owners are sending mares to him. 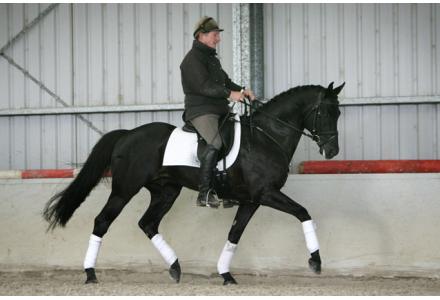