Regardez Moi would have to be considered one of the Australian greats in the dressage world. Regardez Moi came into Australia as a 2yo and has steadily worked his way up through the grades here in Australia. In 2004 Regardez Moi was the Australian National Medium Champion. In 2005 he was the NSW State FEI Small Tour Horse of the Year with numerous scores over 70%. 2008-2009 Regardez Moi took all before him in the Grand Prix arena and became the Australian National Grand Prix Champion. 2009 was a big year for Regardez Moi as he also represented Australia at the World Cup Final in Las Vegas in the USA. In 2009 Regardez Moi was ranked "7th" in the world as a dressage stallion according to the WBFSH-FEI World Breeding Rankings.  This is the first time an Australian-based stallion has ever made an impact on International rankings. 2009-2010 was a slow year for Regardez Moi as his rider, Heath Ryan, actually had a DVT on the flight back from the World Cup Finals in Las Vegas which resulted in a stroke. This really impacted on Heath's performances and consequently the performances of all of his competition horses. That was a tough year but with such good horses like Regardez Moi, Heath was determined and encouraged and relentlessly embarked upon a comeback. Not much fun but Heath did improve and does improve still. 2010-2011 Regardez Moi came storming back into form and again won the Australian Grand Prix Dressage Championships. It was a very convincing National Championships where Regardez Moi won the Intermediare II, the Grand Prix, the Grand Prix Freestyle and the Grand Prix Special. We think this is the first time the same horse has managed to win all 4 classes at the National Championships.

Regardez Moi youngsters are now starting to hit the competition scene and can be found at most major Australian shows and these youngsters are posting outstanding scores of 80% or more in the arena. At the 2014 Australian National Dressage Championships Utopian Cardinal who is by Regardez Moi competed in the Big Tour against his dad. We believe that this is the only example of a father and son competitng simultaneously in the Big Tour in the world.Utopian Cardinal aquitted himself with great honour coming 3rd in the Inter II, 3rd in the Grand Prix, 6th in the Grand Prix Freestyle and 2nd in the Grand Prix Special with Regardez Moi winning all 4 tests. Utopian Cardinal was performing extremely well especially when you realise he was just 9 years of age and he had beaten most of the top horses in Australia.

In 2016 Utopian Cardinal came into his own and claimed the Australian Grand Prix dressage title for himself.

Regardez Moi is by Rubinstein who is clearly one of the worlds leading sires of Grand Prix dressage horses. Perhaps one of the most important inheritances for Regardez Moi is his trainability and his exceptional talent for piaffe and passage. Regardez Moi is particularly talented in all of the collected work especially one-time changes and the canter pirouettes. We promote the statistic that only 6% of all horses are capable of a full Grand Prix repertoire. Most of these individuals that fall into the "6% capable of Grand Prix" are purpose-bred individuals who have parents also talented in the Grand Prix movements of piaffe, passage, pirouettes and one-time changes. Genetics are everything. Regardez Moi is out of a Consul mare. Consul is famous in Australia for being the sire of Crisp who a few years ago dominated the Australian Grand Prix scene with his rider Ricky MacMillan. Right down on the bottom side of Regardez Moi's dam is Donnerhall who won a gold medal with Karen Rehbein in the saddle at the Atlanta Olympics in 1996. Donnerhall is far away the most influential sire in the world in terms of the top Grand Prix horses at the Olympics and World Championships. Also down on the bottom line is a double cross of Angelo. Angelo is the sire of Ahleric who with Dr Reiner Klimke in the saddle was voted Number 1 dressage horse of the last century. Without a doubt Regardez Moi is a collection of some of the best Grand Prix dressage genetics in the world.

As a horse Regardez Moi is a real character. He is particularly intelligent and always looks forward to and enjoys the competitions. He loves being in shows and public performances. He appears at most Auction of the Stars (AOS) Masterclasses and often travels to these presentations with weanling foals either side of him in the truck. He never screams or strikes but does view these youngsters as a curiosity.

When Breanna Tilitzki was just 12 years of age she would appear at the stables everyday after school. On one occassion Regardez Moi had just finished a workout as Breanna's head appeared above the door and Heath had a brainstorm and asked if she would like to walk him around on a loose rein in the indoor school for half an hour, just to cool him down. From that day onwards Breanna has barely missed a day walking Regardez Moi and walks him even on Christmas day and that became something that Regardez Moi looked forward to. The walking out developed to an hour a day and was often done early before Heath had even ridden the horse. This walking out developed to the point where it was not limited to the indoor school but mostly outside, down the lanes past all of the mares and foals. At competitions Breanna would walk Regardez Moi around the showgrounds. In 2009 Breanna experienced her first overseas trip when she flew out with Regardez Moi to the World Cup Finals in Las Vegas. Breanna had her 18th birthday in Las Vegas. This partnership blossomed into a significant part of Regardez Moi's life. Almost like the Puff the Magic Dragon story - "A dragon lives forever but not so little boys, painted wings and giants' rings make way for other toys." So today Breanna has moved on and Regardez Moi misses her terribly. Regardez Moi is old now however still covers a couple of mares each season and stays fit by going on the walking machine twice a day and surveying everything that happens in the stables at Ryans. He is still king of the stables. 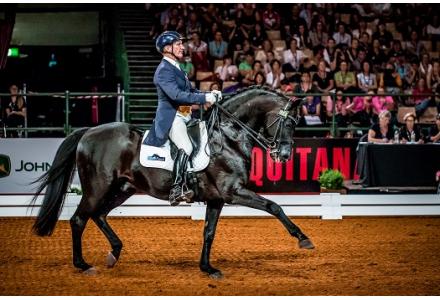