Quinn R is a collection of just the most magical dressage genetics which are current and which are bursting across the world right this moment. Quinn R is by Questing R. Questing R has the most spectacular paces and in 2017 he was the Novice and Elementary Australian dressage Champion and had the highest dressage average of 77% in official tests in all of Australia. Questing is probably about to become one of the red hot stallions in Australia as a sire. His son Quizzical R has just scored 93.6% in the 4yo young horse class at the Sydney CDI 2021. This may well be an Australian record score. Interestingly enough Quizzical R is out of a Jive Magic mare as indeed is Quinn R. Questing R is by Quaterback, who carries the Quando Quando bloodline. Quando Quando represented Australia in 2006 at the WEG in Aachen, Germany, and at the 2008 Olympics in Beijing. Quando has the most amazing temperament and this has found its way all the way down to Questing R. Quaterback was the Bundeschampion 3yr old riding horse. He scored a 10 for his rideablilty. On Quaterback's dam line is Poesie who is the mother of Poetin who won the Bundeschampion as a 3yo, 5yo and 6yo. Poetin sold for 2.5 million Euros! The dam of Quinn R, Jalabaster R is by Jive Magic who has been described as Australia's most powerful Grand Prix dressage horse and who won the Grand Prix at Sydney CDI 2010. Of course, Jive Magic is by Jazz, one of the super-influential stallions of the top dressage horses in the world today. Quinn R's granddam Chatham Park Allie is by Australian Grand Prix Champion Jaybee Alabaster. Jaybee Alabaster represented Australia at the World Equestrian Games in 2010 and at the World Cup in 2012. Quinn R comes with an outstanding pedigree and a family which has competed with success in international competition.

Quinn R has already produced us the most spectacular BML Totality filly, who we are retaining.

BML Totality is the most spectacular black young stallion by Totilas out of a Regardez Moi mare. We think BML Totality is the only Totilas stallion in Australia. The Totilas youngstock are already staring in Grand Prix Dressage scoring over 80% and we think Toto Jr and maybe Total US will be on the Dutch team at the Tokyo Olympics. We already have the first BML Totality foals on the ground and without any doubt they are the most exciting foals we have ever bred!

Quinn R has a 45day PPT to BML Totality for information on this spectacular young stallion click the link below. 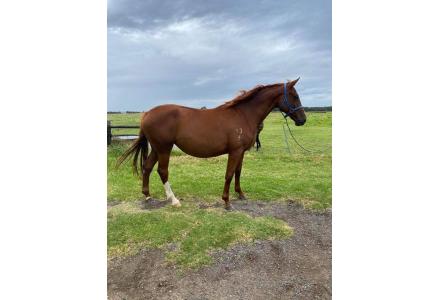