Queenallie R is is the most magnificent big, black mare that moves like a Gazelle. Queenallie R is the only mare at the Ryans by Quando Quando. His career in the sport and breeding could not have been more remarkable. Quando Quando represetented Australia in the 2008 Beijing Olympics, in 2006 Quando Quando was the most successful Oldenburg of the World Equestrian Games in Aachen, in 2004 he won the VTV dressage stallion of the year award. Following this he won several international Grand Prix classes. Quando Quando has the best temperament ever and does pass this on to his progeny. As a sire Quando Quando has been very successful in producing Grand Prix dressage horses and also sired Quaterman who is the sire of Quaterback. Quaterback is the sire of Quincy B. Queenallie R is out of the mare  Chatham Park Allie who was bred by Olympian Racheal Sanna. Racheal rode both the sire of Chatham Park Allie, Jaybee Alabaster, and the dam of Chatham Park Allie, Yardley Charisma, both to Grand Prix dressage and Australian representation. Jaybee Alabaster represented Australia at the World Equestrian Games in 2010 and again at the World Cup in 2012. Yardley Charisma was the Australian Grand Prix Champion in 1998/99 and in 1999 represented Australia at the World Cup Finals in Dortmund, Germany. 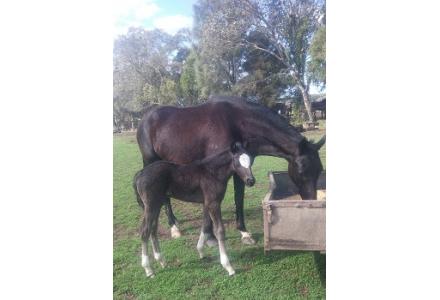