It has taken us quite some time to get over the fact that our imported next superstar stallion did not grow as tall as we expected. After a brief period as a stallion where MSJ Nemo produced some stunning youngsters he has now been gelded.

MSJ Nemo is sired by Negro who is also the sire of Valegro ridden by Charlotte Dujardin. Valegro won the Olympic Gold  Medal at London 2012 and also at Rio de Janeiro 2016.

Nemo R’s grandmother ‘Fernia’ on his dams side is a full sister to Don Schufro. Don Schufro is the sire of Weihegold who was ridden by Isabell Werth and who was the Individual Silver Medallist at the Rio de Janeiro Olympics and was also the team Gold Medallist.

Just for the record Valegro won a team Gold medal at the London Olympics and a team Silver medal at the Rio Olympics.

So that is four Olympic Gold Medals and two Olympic Silver Medals in one horse.

MSJ Nemo is now established schooling flying changes and the beginnings of tempi-changes, half-pass, canter pirouettes and baby piaffe. He is a beautiful horse and very impressive and clever. 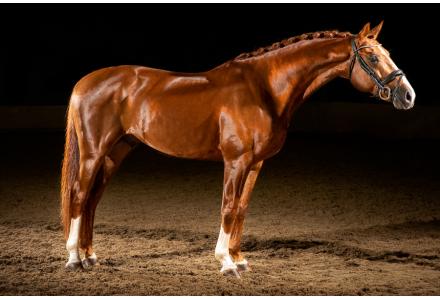