Mystery Whisper is known in the stable as Moses and was originally bred as a dressage horse. Really it was quite by accident that we realised that he was a talented little jumping horse and we have been continually surprised as Moses kept stepping up the grades and continuing to look great. As a 6 year old Moses was NSW Horse of the Year and as a 7 year old he won the Sydney International 3DE 3***. This made him one of the youngest, if not the youngest 3*** winner in the world. Moses is fabulous on the flat as you would expect with his breeding being by Medallion out of the Salute mare Socialite, has a great head for cross country, is very clever and is extraordinarily talented over the showjumps. In 2010 Moses again won the Sydney 3DE 3*** and finished the year coming 4th in the Adelaide 4**** 3DE. Adelaide is the biggest 3DE in the southern hemisphere. Moses is also an accomplished dressage horse winning and placing at Prix St Georges and Intermediare I levels at the big shows all around Australia. Often Heath will do two-time flying changes around the outside of the dressage arena just before entering to do the eventing test. This party trick has occasionally been done by other eventers around the world. Heath and Moses however are planning to go one better and produce a set of one-time changes around the arena. At home Moses is becoming reasonably adept at one-time changes but they are much more difficult than two-time changes and so far Heath hasn't been game to experiment with this little gimic in competition. Could end up being really embarassing!

Moses is a plain little brown horse to look at but when he is going he exudes charisma and is one of Heath's favourites. Too bright for his own good! (the horse, not Heath!) 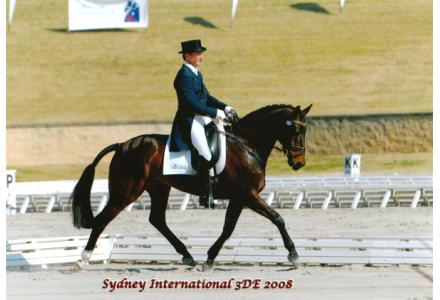