Jostle R comes from a wonderful family. Jive Magic, the sire, is carving out his own dynasty of dressage horses to follow in his footsteps as one of Australia’s best Grand Prix competitors.

Jostle R is out of the wonderful matriarch of the Ryans broodmare herd, Marge R. Marge R is the mother of two outstanding broodmares as well as some wonderful competition horses - Jude R, who is a full-brother to Jostle R and is being campaigned at Grand Prix level by Australian Grand Prix rider Sue Hearn; Jermyn Street, another full-brother is taking a young rider through the dressage ranks; Remeber Me, a now Grand Prix horse about to start out on the CDI circuit, being campaigned by Grand Prix rider Jess Clarke; Ronan R, another young horse for the future owned by Sappho Ransan-Elliot again with a big future mapped out. Interesting to note, Marge R is by Richmeed Medallion who is also the sire of Mystery Whisper, who competed at the 2012 London Olympics.

Jostle R is a beautiful upstanding looking mare. She has a very sweet temperament and is very, very quiet. Jostle R has three really nice paces, probably three spectacular paces. Jostle R is schooling most of the Grand Prix work herself with established tempi-changes, piaffe, passage, pirouettes and half-pass. Jostle R is owned by Rebecca Fenner. 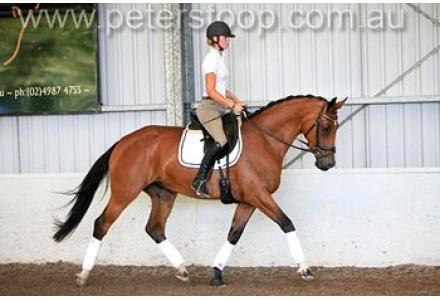