Jellybean R is shaping up to be a legend as a broodmare in her own right - her first foal who was by Regardez Moi was a brown filly called Raspberry R. This mare was sold to the UK. The second foal who was also by Regardez Moi is a chestnut colt called Redskin R who was bought by Australian Olympic rider Mary Hanna. Jellybean R has outstanding foals and Heath is keeping one of her fillies Reeces R for his next Grand Prix project.

As an extra for the breeding buffs, Jellybean R is out of LaBella R. LaBella R is the dam of the stallion Rendezvous who is campaigning at Prix St George level in Victoria with Cheryl Fort. Rendezvous is showing all the signs of being an absolute superstar even with his amateur owner/rider. Jellybean Rs sire is the great Jive Magic. 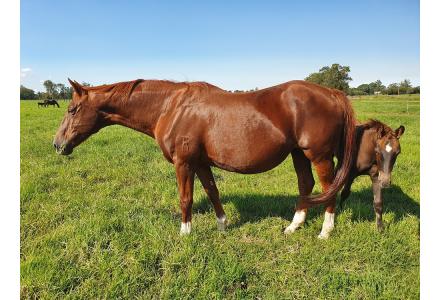