Fireworks R is owned by the Plenty family and is the result of five generations of breeding at Ryans. From a conformation point of view, he is statuesque and beautiful. His paces have got to be seen to be believed. To this day people still talk about his grandsire, Florencio I, and how he moved as no horse had ever moved before him. We actually put Regalia R up for sale as a weanling at an AOS auction in Victoria a long time ago and then bought her back when we realized what a freak mover she was. We believe that today, all of this breeding and movement has by some chance come together in this outstanding individual. Fiji R is definitely stamping his progeny with the most beautiful temperaments. The dam, Jamie R, is a collection of genetics from our two Grand Prix stallions, Jive Magic and Regardez Moi. These two stallions between them carry the bloodlines of Donnorhall, Rubinstein, Consul, Jazz, Angelo, Florestan I and Weltmeyer. These are the main bloodlines in the top 20 placings at the London 2012 Olympics. Fireworks R is naturally round, soft and steady to ride. His paces are magnificent to watch and yet are truly still baby. He has enormous improvement still in him even though his trot and canter must nearly challenge scores over 9s even in Germany. This is probably the most spectacular young horse we have ever presented. Fireworks R is now schooling the Grand Prix work with the most amazing piaffe and passage. 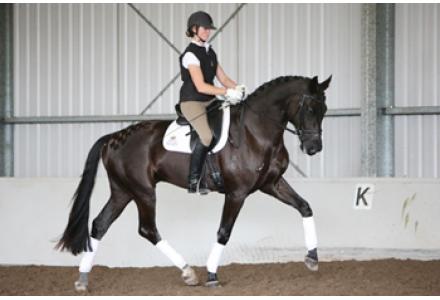