One of the most brilliant eventers in the country in his day. Had amazing movement on the flat, was very fast and extremely nimble over cross country fences and was a fun showjumper.

Flame's biggest win was the Adelaide International 4**** 3DE in 2006 with Heath in the saddle.

Flame now resides in Orange with Deidre Kinghorn who once owned Flame in the days before Flame and Heath became partners. In actual fact Flame was ridden by Cheryl who is Deidre's daughter and he now has a paddock to himself, whinneys when his breakfast is late and is very fat. Flame will always be remembered at the Ryans. Heath does still have a mare called Song R as part of the Ryan broodmare band and like Flame she is by the throughbred stallion Sanction. Song R is one of Heath's secret broodmares which is producing youngsters which will one day hopefully campaign for Australia like Flame did. Just an interesting aside for the breeding buffs - the dam of Sanction is a mare called Sascha. Now Sascha is by Sir Dane. Would you believe it, Sir Dane was the sire of Stirling Shade who in the very very early days of Heath's career won two Australian Three-day Event titles with Heath in the saddle. Both Stirling Shade and Flame were legends in their own time. 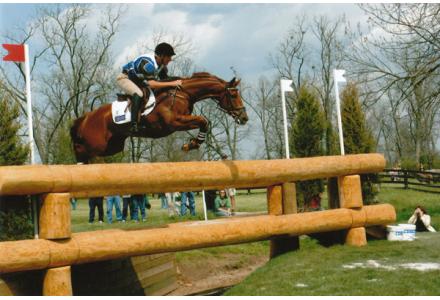