Fiji R is by Florencio who was the World Young Horse Dressage Champion as a 5yo and then again as a 6yo. Florencio initially looked like being the number one stallion in the world, until he contracted EVA. This stopped Florencio from breeding duties and so we feel particularly fortunate as Fiji R was one of his first foals. Florencio is by Florestan I who has evolved into one of the top influencing dressage lines in the world with offspring competing at the 2008 Beijing Olympics.

Fiji R has developed a wonderful partnership with young rider Breanna Tillitzki and together they have worked their way from the preliminary levels right up to and including Grand Prix. This is a pretty fabulous effort for two youngsters, Fiji and Bree. Youngstock by Fiji can be found in training with some of the top professionals in Australia like Rachael Sanna and NZ Olympic rider Louisa Hill. 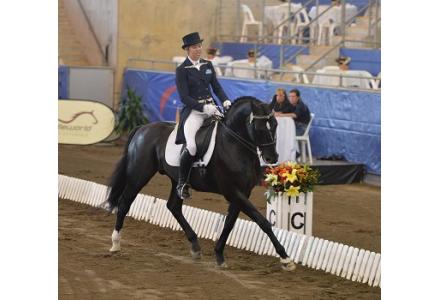