Cynthia R is a standout young filly with charisma, character and springing paces. Cynthia R is by Wimborne Constable who is well known for his great success in eventing at the top levels. Constable is the only 4* (Olympic level) eventing stallion in Australia. Not only does Constable compete 4* in eventing but also is training through all the Grand Prix dressage movements. Constable is by Contenda who is in turn by Contendro I who is one of the Worlds best jumping and eventing stallions but is also known for producing numerous horses through to Grand Prix and in the 2021 WTFSH dressage rankings was ranked 72nd. On Constables dam line is Gribaldi. Who is the sire of the legendary Totilas! Totilas is still considered today as being the best dressage horse ever seen. He broke all world records!

Slinky R is the dam of Cynthia R and is one of the few remaining Salute mares. Salute was imported to Australia by Heath and Rozzie in 1989.  Salute is perhaps the most sought after Olympic bloodline in Australia: sire of Victory Salute (Australian Grand Prix Dressage Champion and 9th at WEG in USA);  Stirling Stilton (represented Australia at the WEG in Spain in 2002 and was the highest scoring Australian GP Dressage horse) DP Christopher (NSW Grand Prix Dressage Champion).  Slinkys dam Lynx is a full sister to Londoner. Londoner was the Australian Prix St George and Intermediate 1 Champion when he was just 6 years of age many years ago (6yos are no longer allowed to compete at this level). He was sold to Mary Hana who took him on the Trans-Tasman tour of New Zealand and here he won all of the Grand Prix competitions beating the Australian and New Zealand Team member horses. This was a big upset.

Video footage is on the link below 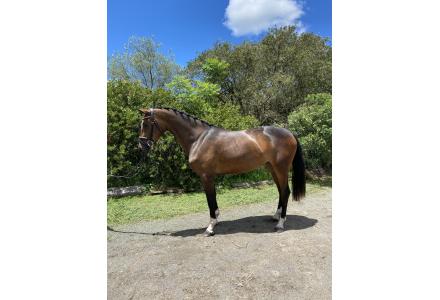