BML Totality is very elegant, has great paces, a natural softness, a beautiful back to sit on and has a great attitude towards training. We are very excited! The breeding on BML Totality is to die for. His sire Totilas is still considered today as being the most amazing dressage horse ever seen, and we are unlikely to see another horse like him for another 100 years. Totilas broke all world records and was a living legend. The Totilas bloodlines are only just now starting to hit the competition scene and the results look breathtaking with the Dutch Olympic Team at Tokyo having three out of four team members riding Totilas youngsters. Perhaps the best current examples are the Totilas young stallions Glocks Total US ridden by Edward Gal and Glocks Toto Jr ridden Hans Peter Minderhoud. Look up the Black Magic show at the KWPN stallion show 2019. BML Totality is out of the Regardez Moi mare, Resplendent R. Regardez Moi having three times been the Australian Grand Prix Champion and having represented Australia at the World Cup finals in Las Vegas. Resplendent R is out of Jumping Janie R who is by the Grand Prix winning dressage stallion Jive Magic. Jive Magic is by Jazz. Jazz also made himself felt at the recent Tokyo Olympics. The mare line on BML Totality brings in lots of great bloodlines in Donnerhall, Rubenstein, Jazz, Pik Bube, Angelo and Salute. BML Totality has just started his competition career with a win and 71%. As a young stallion with a great future BML Totality is so exciting. The first of BML Totality's foals are absolute stand outs! As a young sire with the best of the best bloodlines BML Totality represents the edge of the edge in state-of-the-art bloodlines. 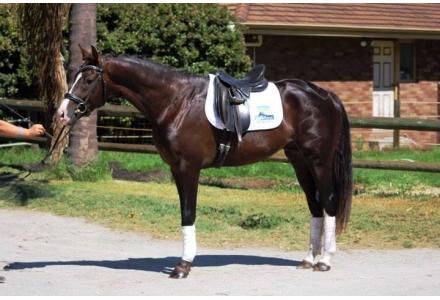