I was born in Colchester, England and began riding horses at the age of 3 at West Mersey with a wonderful teacher -  Miss Catchpole. My parents were not involved with horses initially but were very supportive and my mother particularly enjoyed the competition scene. I was lucky enough to always have great ponies and competed in everything I could get myself to -  Eventing being my first love.

On leaving school I trained and qualified as a Nurse (SRN) at the Middlesex hospital. After qualifying I was offered a fabulous riding position at Wiseland stables with Jane Houghton-Brown/Goldsmith my long time trainer and friend. It was while I was here that I met Heath, who had been training in Germany and came to the stables to do some event training. He came with me to Bramham 3DE where I was competing -  the first and last time he ever strapped! Without knowing what I was letting myself in for – I came to Australia! 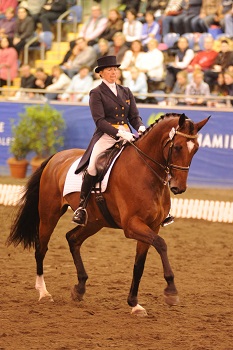 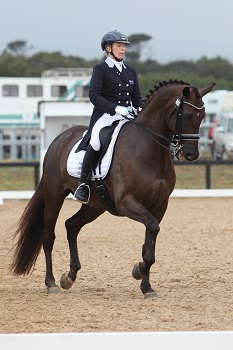 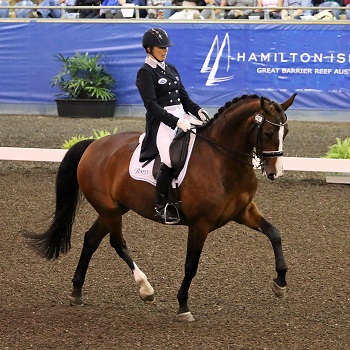 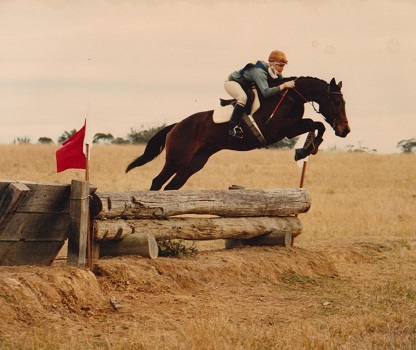 When I first arrived, Heath and I worked from his parents stables in Blackhill, NSW. In 1983 Bob & Judy Mitchell started the NSW Equestrian Centre at Lochinvar and Heath and I were involved there from the beginning and I fairly quickly made the transition to Dressage after forming a partnership with the wonderful STIRLING WILTON. He was a very reluctant eventer but a fabulous dressage horse and with him I was part of the first Australian Dressage Team to travel overseas to the World Equestrian Games in Stockholm, Sweden in 1990. My other horse Statford Sigismund owned by Barry Loiterton was travelling reserve for the same team.

1996 -  travelled back to Europe with Dr Margaret Evans horse EXELLENT. I was lucky enough to stay and train at Stal Bartels Academy in The Netherlands with Tineke Bartels. I returned to Europe again in 1997 with an Australian team to train firstly in Germany with Herr Herbert Rehbein and then back to Tineke Bartels.

1999 EXELLENT won the Pacific League World Cup Final here in Australia and we travelled to Europe once again to s’Hertogenbosch in the Netherlands but during the competition EXELLENT trod on a roofing nail in the arena, resulting in him being taken to Utrecht Vet Hospital and ending the sad day on the operating table.

I am sure this incident did not help our Olympic dreams and we narrowly missed out on selection for the Australian Olympic Team in 2000.

After EXELLENT I had two more great Grand Prix horses - Robyn Horsley's wonderful horse, ARGLEN KALEB who was sadly put down after a colic operation and Clyde Wunderwald’s GREENOAKS LEGEND whom we had to retire due to injury.

In 2006 I took over the ride of Susie Duddy’s beautiful black mare DONNA CARRERA who finished 10th in the World Cup Final in s'Hertogenbosch and subsequently was reserve horse for the Beijing Olympics in 2008. DONNA has now been sold to Sweden.

I was competing my own bay stallion JIVE MAGIC who won the Grand Prix at Sydney CDI in 2010 but he is now unfortunately retired due to injury during stallion duties. He lives on in the competition arena through his successful progeny one of which JARRAH R I am currently competing.

I was lucky enough to have the ride on GV BULLWINKLE owned by Peter and Olivia Bunn after he finished eventing at 3* with Olivia. He turned out to be a fabulous, brave and reliable Grand Prix dressage horse culminating with him being selected as 1st reserve horse for the 2012 London Olympics. He is currently competing with his new owner YR Annie Simmons.

I am presently competing two horses at Grand Prix level, JARRAH R who is a son of JIVE MAGIC owned by Jonah and Edna Bevan. JARRAH R in 2017 won his first Grand Prix's at the big shows. Since then he has gone on to be one of Australia's top Grand Prix horses at the CDI competitions. JARRAH R was easily in the top 5 horses in contention for the Tokyo 2020 Olympics. The cancellation of these Olympics to 2021 means that the whole selection process will get reviewed and so it is start all over again and we will see!

The second horse is the exciting KWPN mare ADONIE owned by the Plenty Family. ADONIE is definitely magnificent and brilliant and I hope I can keep developing a more and more confident partnership with this mare. In my minds eye ADONIE could easily become the best Grand Prix horse Australia has ever seen if I can manage to let her reach her potentials. You never know, the Olympics being postponed for a year just might play into ADONIES hand!