F1 Julius Caesar was bred by Jeff Sharp and Melody O’Toole. Jeff bought Skansen Duschka from Lesley Ann Taylor who at the time was based in South Australia. Duschka had been bred by Lesley Ann and was by her imported stallion Du. Lesley rode Duschka to Prix St George/Intermediate I level with great success. Jeff and Melody put this mare in foal to Jive Magic and F1 Julius Caesar was the outcome. Jive Magic was of course a very successful Grand Prix dressage stallion winning some very big competitions with Rozzie Ryan in the saddle. F1 Julius Caesar is a really beautiful young horse with four white stockings going all the way up to his hocks and his knees. Julius Caesar also has a big white blaze going down the center of his face and he is certainly very noticeable with this much bling. F1 Julius Caesar has been worked primarily by Hazel Shannon who is in the saddle in the photograph. F1 Julius Caesar has a good walk, a good trot and a good canter. He is naturally compact and round and is working on the bit nicely. This youngster has the whole world in front of him and is bred in the purple. 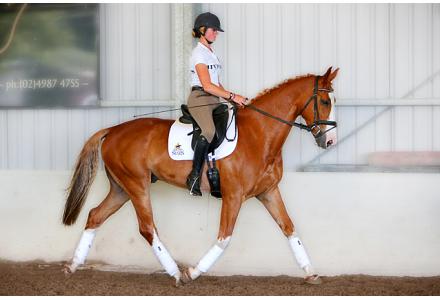